Sam Simon is a co-creator and executive producer of the longest running scripted primetime show ever:  The Simpsons.  Simon, however, clashed with the other Simpsons' creators and left the show in 1993, after only four seasons.  Co-creator Matt Groening called Simon and "brilliantly funny" but "unpleasant and mentally unbalanced."  D'Oh! 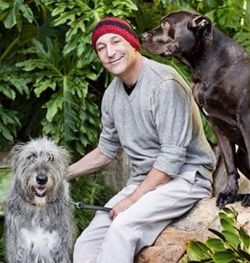 In hindsight, Simon should also be described as a brilliant businessman.  He negotiated to keep executive producer credits for the show and a share of The Simpson's profits each year, including the highly-lucrative home media distribution.  So despite having left the show 20 years ago, Simon is still listed as an executive producer on each episode.  And his profits keep rolling in, year after year.

Interestingly, Simon appears embarrassed by how much money he still receives -- tens of millions of dollars each year, as he's revealed in media interviews.  He's said it's far more money than he could ever need.  Because Simon is divorced, and has no children (although he is engaged), Simon says his family members are already well-taken care of and don't need his lucrative Simpsons' royalties.