The New York Times recently featured a fascinating article called The Battle for a Comic-Book Empire That Archie Built.  It detailed the ongoing legal battle over the two dueling CEO’s of Archie Comic Publications. 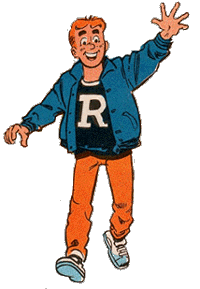 On one side is Jonathan Goldwater, the son of John L. Goldwater who was one of three founders of the company and the visionary behind the Archie character, created in 1941.  Goldwater became a co-CEO and controller of one-half interest in the company after his half-brother, Richard Goldwater, died in 2007.

Nancy Silberkleit is the widow of the son of another founder, Louis Silberkleit.  She was a schoolteacher who became co-CEO when her husband, Michael Silberkleit, died in 2008.  By that time, a long-time employee and editor-in-chief, Victor Gorelick, was running the company as a temporary, stop-gap measure.

Goldwater and Silberkleit tried to work together to manage the company, agreeing in 2009 to run Archie Comics by sharing CEO duties.  Silberkleit was to oversee scholastic and theatrical ventures, placing Goldwater in charge of everything else.  They were supposed to consult with each other on major decisions.

So what happened?  Let’s just say that the idyllic Riverdale community, which Archie and his friends call home, wouldn’t approve.  Goldwater claims Silberkleit abuses her power on a scale that would fit in with the movie, Horrible Bosses.  As the Associated Press described it, Goldwater and others accuse her of being “a volatile, abrasive menace who has sexually harassed employees with vulgar remarks, made bad business moves and even paraded a former football player around the office to intimidate people.”

Goldwater even alleges that she of asked male employees to pull down their pants, fired employees she deemed too old, fat or buxom, and let her dog defecate in the office.  Silberkleit denies it all, of course, and says Goldwater is trying to steal the company from her, has defamed her, and that he’s a chauvinist who has tried to lock her out of the company finances.  She even accuses him of puncturing car tires.

They’ve filed lawsuits against each other.  So far, Goldwater appears to be winning.  A New York Judge in one of the cases entered a temporary restraining order against Silberkleit, banning her from the company, preventing her from speaking about the lawsuit and from representing Archie Comics in any way.  Silberkleit then violated the order twice and was ordered to pay nearly $60,000 in fines and legal expenses.  Goldwater, meanwhile, has been allowed to run the company without her during the legal battle.

The parties are now trying to mediate the dispute and find an end to their differences.  Given the nature of the allegations, this seems unlikely.

So where’s the lesson in all of this?  Before the dueling CEO’s predecessors, Richard Goldwater and Michael Silberkleit, died in 2007 and 2008 respectively — both from cancer — they should have done the proper succession planning to have the business taken over by responsible leaders who could cooperate.

Instead, Jonathan Goldwater bought his interest from Richard’s Estate, and Michael’s shares passed to his widow.  A long-time employee was forced to run the company on an emergency basis, and that proved to be only a peaceful interlude to the nasty battle that followed.

Would Richard and Michael — or their fathers, who founded the company for that matter — have wanted the Archie enterprise to descend into such a bitter and ugly court fight?  Of course not.  With thoughtful, advance succession planning for the business, this could have been avoided.

It’s especially important when a closely-held business is run by two equal partners, which can create deadlocks and worse.  Corporate documents like buy-sell and shareholders agreements, and stock restrictions, can ensure that ownership interests don’t pass onto heirs of someone who dies, without the permission of the company or the co-owner.

In other words, just because two business partners get along well — as was the case for decades in Archie Comic Publications — doesn’t mean the next generation will do so too.  When succession planning is done in advance, restrictions — or at the very least, mechanisms to dictate how decisions will be made and what procedures are to be used in case of disagreement – can be used to avoid results like this one.

That’s why it’s important to work with experienced estate planning attorneys, particularly those skilled in business succession planning, when there is a family business.  No one thinks that ugly feuds like this one can happen. But they do, and proper legal planning done in advance is the best source of prevention.