Hugh Hefner Was A Role Model ... When It Came to Estate Planning

When most people think of Hugh Hefner, they picture the famous Playboy bunny logo, young and buxom blonde women by his side, and his ever-present robe and captain's hat.  But people should also think of his smart business and planning sense.  After all, Hefner started a unique business with $8,000 in 1953 and grew it into a massive global enterprise. 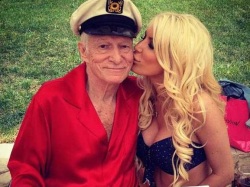 How Hefner used the resulting wealth to plan for his golden years and beyond was as unique and innovative as the way he lived his life.  It certainly isn't a road-map for everyone, but it worked out well for him.

It started at least as far back as 2010, when Hefner and his second wife, Kimberley Conrad, finalized their divorce after a 12- year separation.  At this time, records from his divorce pegged his net worth at about $43 million plus the value of his Playboy Enterprises stock and real estate.  Those records also revealed his yearly income to be nearly $3.5 million, with his expenses topping out at just over $1.3 million annually.

The big open question, of course, was:  What was the Playboy stock worth?  In 2011, Hugh Hefner partnered with a private equity group to purchase the Playboy stock and take the company private, for a total package worth $207 million.  When the dust cleared, Hefner ended up with a 37% ownership interest in the new company along with an employment contract that paid him one million dollars per year, gave him editorial control over the Playboy brand, and the right to remain in the famed Playboy mansion practically rent free for the rest of his life.

Continue reading "Hugh Hefner Was A Role Model ... When It Came to Estate Planning" »