Muhammad Ali was never one to shy away from battles.  From heavyweight champions in the boxing ring, to the United States Government, and to the ravaging effects of Parkinson's disease, Ali continued to fight.  Now there are growing fears that the fight will follow him into the grave, with mounting reports of trouble on the horizon for his estate and his legacy. 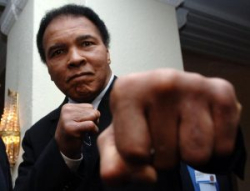 The circumstances are ripe for an estate battle.  Muhammad Ali fathered nine recognized children (including his adopted son from his most recent marriage) over the course of four different marriages.  Estate disputes between the surviving spouse and children from prior marriages are the most common source of trouble in probate courts across our country.  Add in the reality of Ali's long-standing struggles with Parkinson's disease -- which can have not only physical effects, but mental as well -- and there is a strong possibility that unhappy heirs may file challenges in court.

And, of course, there is the reality that so much money is on the line.  Initial reports are that Muhammad Ali's fortune ranged between $50 million and $80 million.  But that could just be the start.  As Entertainment Tonight reported, the value of the champ's fortune could increase dramatically now that he is gone, just as happened with Elvis Presley, Whitney Houston, and Michael Jackson.