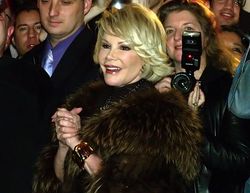 So why was Joan Rivers’ death so shocking?  Maybe it was her zest, vibrancy, and attitude that made her seem anything but eighty-something.

Or perhaps it was because Rivers, unlike so many of us, was comfortable talking about growing old and dying.  She told many jokes about death — even her late husband’s tragic suicide was not out of bounds. She turned to plastic surgery to battle aging at every step.

Yet she never was afraid to face the reality that she was growing older.  Losing her memory because of aging was one of her favorite sources of comedy material.  Again from her Twitter account:

I must admit I am nervous about getting Alzheimer’s. Once it hits, I might tell my best joke and never know it.

And she wrote this as part of her disclaimer for her latest book, Diary of a Mad Diva:

This diary was written to the best of Joan Rivers’ memory.  As such, some of the events may not be 100 percent … or even 5 percent factually correct.  Miss Rivers is, after all, 235 years old, and frequently mistakes her daughter, Melissa, for the actor Laurence Fishburne.

Her willingness to make light of aging and dying almost made it appear that she would be immune.  She certainly didn’t look or act 81 years old!

But the jokes did not hide the fact that Joan Rivers was ready for the inevitable.  Some of the recent television tributes to Rivers have included a poignant video clip from her reality show from earlier this year.  In it, she earnestly pleads with her daughter, Melissa, to be ready in case she does not make it out of an upcoming surgery.  Far from being the one worried about her own mortality, Rivers tells her daughter, over and over, that Melissa and Cooper will be fine when the day comes.  John Rivers says she’s had a remarkable life, even if it ends that day.

How do we know this?  Because Melissa Rivers made the decision to take Joan off of life support.  In New York, as all other states, a family member — even a spouse or the only daughter or son — cannot automatically make the decision to allow someone suffering to pass away with dignity and stop artificial intervention.  These decisions can only be made if the patient did the proper legal planning ahead of time.

Too many people think that estate planning is all about wills and trusts.  Far from it, end of life planning is often more important.  In fact, every adult over the age of 18 should have some type of advance directive.

Advance directives are legal documents that allow family members (or anyone named by the person who signs them) to make medical and termination of life support decisions for someone who becomes incapable of doing so.  There are different varieties of these important estate planning documents, and the names vary from state to state.  For example, there are living wills, medical powers of attorney, health care proxies (or directives), do-not-resuscitate (DNR) orders, and patient advocate designations, among others.

These different documents can accomplish the same result in slightly different ways.  For example, in most states, a living will is a document that instructs hospitals and doctors under what conditions the patient wants to stop medical care and treatment and allow the end of life.  A proxy, directive, or advocate designation document nominates another person to make medical and care decisions for the patient, in accordance with the patient’s wishes.

What happens when someone is on life support and none of these documents are in place?  Then the family members are forced to go to court to file for guardianship (called conservatorship in some states) and ask a judge for permission to make these decisions.  This can set the stage for a nasty family fight if people disagree on termination of life support (Terri Schiavo being a prominent example), or even a complete refusal to allow the life support to end, if the patient’s wishes were never reflected in writing.

While it is widely reported that Melissa Rivers made the decision for her mother, she did so without a guardianship proceeding.  Unlike what happened a few months ago with Casey Kasem, when Kasem’s daughters went to court and battle against their step-mother for authority to follow medical recommendations and allow Kasem to pass on, Melissa Rivers was able to promptly follow the doctors’ advice and remove life support without court intervention.

This means that Joan Rivers must have had some type of advance directive in place, through either a New York state form or a document prepared by an estate planning attorney, to allow Melissa to make this difficult decision on her behalf. It’s a great lesson for everyone to share with their loved ones as well as their clients — especially for financial planners that have frequent conversations with clients about their financial futures but may not ever mention this other important aspect of everyone’s future.

If you haven’t already done so, we strongly suggest you follow Joan Rivers’ lead.  Plan for the day when you can no longer make decisions for yourself.  Talk to your loved ones about it — not only about your final wishes but theirs as well.  And, as Rivers taught us, it’s okay to use humor even when talking about this difficult subject!  In fact, doing so may make it a little bit easier.

You can always use Joan Rivers’ story to spark the conversation that may encourage your loved one or client to stop procrastinating and finally take action.  Not sure where to start?  A call to a good estate planning attorney is always a great idea.

But even your doctor’s office can help get you started with the basic forms and documents, so you have something in writing. As Joan Rivers said, there is no need to be afraid of dying.  It will happen, and it will undoubtedly be a sad and stressful time for the loved ones you leave behind.  So why not make it as easy on them as you can?