Home Archives Profile Subscribe
Amy Winehouse Cut Her Ex Out Of Her Estate
Is 94-Year Old Zsa Zsa Soon Going To Be A New Ma Ma? 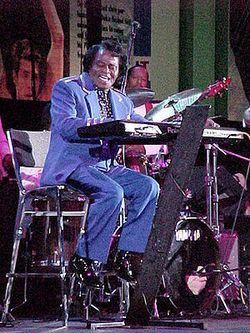 To complicate the estate, Brown never updated his will or trust during his five-year marriage to Hynie, so it was unclear if he did or did not want to include Hynie or his new son.

Many feel that Brown’s wishes were clear however, and those wishes did not include his family.  As a recent article in Rolling Stone Magazinepointed out, his former attorney and a former producer who used to work with him both publicly claim that he only wanted his wealth to help needy children, not his own children.  His widow and adult children feel otherwise, though, so they have been battling to receive a share of his family fortune.

The case seemed to reach a conclusion, designed to prevent a lengthy and expensive fight, back in early 2009.  At that time the Attorney General’s office of South Carolina and the family struck a settlement, giving the family a 50% share in the estate.  Hynie was to get about one-quarter and another quarter was to pass to all of the children (including James Brown II, who was agreed to be Brown’s son).  Brown’s charitable intent was slashed in half.

Did that resolve things?  Not even close.  Two of Brown’s former trustees, who had been removed from administering the trust, appealed the probate judge’s decision to approve the settlement, arguing that Brown’s intent was clear and the estate planning documents he signed — including the trust he established for poor children — had never been found to be invalid.  That appeal is now with the South Carolina Supreme Court.

And one of Brown’s former producers, Jacqueline Hollander, also sued to stop the settlement.  She claimed that Brown had created a partnership with her to allow her to manage the trust for needy and poor children.  She alleged that he has assigned all of his assets into the trust.  She says she has undeniable proof, including Brown on videotape affirming his desire to benefit poor children through this trust.  Hollander permitted the Rolling Stone writer to review all of her evidence, and together they gave a recent radio interview and explained how Brown’s wishes were clear — he wanted poor children to benefit, not his own children.  In fact, they pointed out that Brown’s relationship with his children had grown so distant in his final years that they had to schedule an appointment to see him.

Unfortunately for Hollander, her lawsuits haven’t gone well.  She first sued, twice, in Illinois where she said the partnership was created, but those cases were thrown out.  She then tried federal court in California, which also dismissed the case not once but twice, because she sued in the wrong court, the judge ruled.  This last dismissal happened just recently and Hollander has already appealed the decision, still fighting desperately to enforce what she believes were Brown’s clear wishes.

It remains to be seen whether Hollander’s efforts, or the appeal in South Carolina which also seeks to have all of Brown’s money pass to charity and not his family, will be successful.  But what cannot be questioned is that the legal fees, lost time, and court costs expended in these fights mean that if the poor and needy children that Brown wanted to help ever do benefit from his estate, it will be much less — and much later — than Brown ever could have imagined.

Brown’s adult children believe that the estate planning documents do not reflect his true wishes, either because of mental incompetency or undue influence, which are the legal theories that family members often use to attack wills and trusts.  The family also was able to challenge Brown’s wishes due to the fact he failed to update his documents after his marriage and the birth of his son.  What a mess it all turned out to be!

Unfortunately, family estate fights are not uncommon, for the rich and famous or for those with even modest estates.  The James Brown Estate case serves as a valuable lesson on how important the proper estate planning is.  When people take care of their planning early, when there can be no question of incompetence or improper influence, and then update the documents the right way after life events like marriages and the birth of new children, the chances of a fight over the family fortune are greatly reduced.

That is why we use this story, and other celebrity estate tales, in our new television special, Trial & Heirs:  Protect Your Family Fortune!, to teach people about protecting their families.  No one wants to go through a fight like this one, even if your estate isn’t worth 100 million dollars.

By:  Danielle and Andy Mayoras, husband-and-wife attorneys, authors of Trial & Heirs:  Famous Fortune Fights!, and hosts of the new television special, Trial & Heirs:  Protect Your Family Fortune, which premieres August 9, 2011 at 8 pm (EDT) in Michigan, on Detroit’s PBS affiliate, andinternationally online through ustream.tv.  The TV show will air on PBS affiliates across the country in November and December.  You can visit www.TrialAndHeirs.com/TV-Special to learn more.