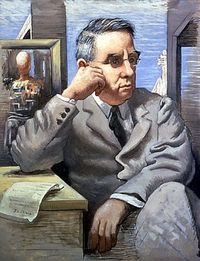 The Friends of the Barnes Foundation were determined to stop the trustees of the charitable trust from ignoring Dr. Barnes' wishes and moving his prized art collection to a location next to the Philadelphia Institute of Art.  They took the case back to court and presented new evidence which they said had been kept from the Judge when he had decided to allow the relocation in his 2004 decision.

Shockingly, the group discovered (along with other new evidence) that the State of Pennsylvania had allocated $100 million to build a new home for the Barnes collection, in downtown Philadelphia, back in 2002.  The public financing was buried in an lengthy appropriations bill passed by the state legislature, long before the move was legally permitted.

In other words, the State government funded the move -- supporting the efforts to undercut Dr. Barnes' express wishes in his trust -- at the same time a State official (the Attorney General) was charged with the responsibility of protecting the trust and Dr. Barnes' intent.  Talk about a conflict of interest!  Remember, the Attorney General sided with the trustees and advocated to allow the move.

So what did the Judge do when presented with new evidence suggesting that the Attorney General's office and even the Governor of Pennsylvania were biased in favor of the move?

He ruled that the students, teachers and neighbors of the Barnes Foundation did not have legal "standing" to bring the new legal challenge.  He felt that only the Attorney General, or the trustees, could challenge the prior ruling to permit the move, based on established legal precedent in the state.  So he threw the case out of court, never addressing the new evidence.

In other words, despite the conflict of interest that had been exposed with the Attorney General's office, he ironically ruled that only the people who helped orchestrate the move had the ability to oppose it in court.  He let the proverbial wolves continue to guard the hen house.

But were his hands really tied by the prior legal precedent?  Wasn't there another way to protect Dr. Barnes' wishes?

There sure was.  It is common practice for judges in trust, estate and other probate-related proceedings to appoint a "guardian ad litem" or a "trustee ad litem", to protect the interests of those who cannot protect themselves (such as children or unknown heirs).  This would typically be an attorney who would be paid from the trust or estate.

In fact, the Friends Group's Petition requesting that the Judge reopen the case also asked that two people be appointed in this role.  Additionally, the court rules of Pennsylvania allow Judges in these types of cases to appoint trustee ad litems even if no one requests them, in cases when there are interests to be protected which are not adequately represented.

So the Judge could have appointed someone in this role to make sure the beneficial interest of the trust (i.e., the future students and general public) could be fully protected, in the way Dr. Barnes intended.

This means that even if the Judge felt the Friend Group lacked the legal ability to challenge the relocation (in other words, no proper legal standing), he could have -- on his own -- followed their suggestion of appointing a trustee ad litem to investigate the new evidence and advocate for a position based on that evidence.

That way, there would have been someone independent to represent what Dr. Barnes would have wanted (based on how his trust was worded), and the Judge would have been presented with both sides of the controversy, instead of only one.  By failing to do this, the Judge avoided answering the difficult questions that the Friends of the Barnes Foundation raised.  Such as:

Because these questions, and more, were never put to the legal test of a full hearing in court, we can only wonder whether the move truly was financially necessary.  If it wasn't, Dr. Barnes' wishes would have been respected, rather than ignored.

If you'd like to learn more about this so you can make up your own mind, rent and watch The Art of the Steal.  Here's the website of 9.14 Pictures, which is the independent film company that made the documentary.