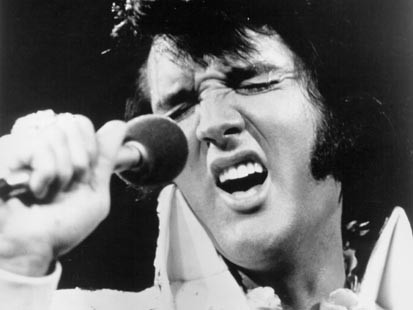 The matching number of "loci" determines if there is a genetic match of kinship.  The closer the relationship between people tested means more "loci" will match.  Each person would match himself or herself 100%, and no one else (unless there was an identical twin).

With these reports, there are way too many matching "loci" for all of this to be a coincidence.

These reports show that Eliza and the person now referred to by many as "Jesse" are half-siblings, and Jesse in turn is biologically related to the known cousins on both sides of the family tree to Elvis Presley.  Because Elvis never had any full siblings (other than a twin, Jessie, who was stillborn), no one else could match cousins on both sides but Elvis himself.

Think about it -- who else is related that close to your cousins on both sides of your family?  Only you and your siblings.  Even your children and parents wouldn't match as close because they only share half of your DNA.

And I'm not the only one who read the reports and came to this conclusion.  Suzanne Stratford did another report for FOX 8 TV News about Eliza's DNA evidence, which you can watch here.  This report concludes that the samples do match.

Eliza also sent the results to another independent DNA company to verify the results.  The lab owner, Dr. Donald Yates, said publicly that the DNA supported Eliza's claim and that Jesse had to be Elvis.  And yes, he said, this means that Elvis is alive.  Here's a Memphis newspaper article about it.

Does this mean the world is ready to believe Eliza?

Not quite yet.  Elvis' death is a "truth" that has been accepted for more than 30 years.  Eliza is literally trying to rewrite history.  She's going to need absolute, undeniable proof before she can garner widespread acceptance.  But, she's spent too many years of her life battling those who don't want the truth to come out to stop now.

While the evidence I've seen is strong and compelling, I believe the public will need to see something more direct and concrete to prove a conspiracy this strong.  Relying on blind samples provided by cousins, outside of the court process, is not enough to change the history books.

There are only two ways to do so.

One would be for Lisa Marie Presley to come forward and provide a little saliva for a DNA test.  The attorney for Elvis Presley Enterprises said in the past that Lisa Marie won't, because once she does it for one person, then she'll have to do it for everyone claiming to be related to Elvis.

The problem with that excuse is that Eliza is the only one who has ever presented enough evidence to convince a judge to reopen a Presley Estate.  No one else has gotten that far.

Second, if Lisa Marie provides her DNA once, there would be a record of it and she wouldn't have to ever submit it again.  The one sample could be tested against anyone claiming to be related to Elvis.  So why not do it?

So far, she refused to cooperate when asked by the FOX TV News team in Cleveland, even though it would have quickly ended this entire debate.  In fact, Lisa Marie moved to London shortly after Eliza Presley's lawsuit was refiled last August.

Eliza tells me that she will try to compel Lisa Marie to provide her DNA through the ongoing court case, but if Lisa Marie remains in Europe, that's not going to happen.

Which means there is only one other option to conclusively expose the conspiracy to the world.  Vernon's grave would have to be exhumed and his body tested.  And while they're at it, Elvis' grave should be opened as well.

I know, it sounds very distasteful, and I've asked Eliza about doing that very thing.  She doesn't want to do it, unless she absolutely has to.  When I first asked her about that possibility, she said it was "unthinkable".

I for one believe there is no choice if Eliza wants to prove she's telling the truth ... unless Lisa Marie Presley changes her mind and donates a little saliva.

Exhuming bodies of famous people for DNA testing has been done before.  Here's an article I wrote about famed football player George "The Gipp" Gipper.  His body was exhumed for testing because of people claiming to be heirs.

In the book I co-wrote with Danielle Mayoras, Trial & Heirs:  Famous Fortune Fights!, we include the story of Sonny Bono.  A sample was taken from his body for paternity testing, based on a claim of someone who said he was Bono's secret love-child.

Will Eliza's journey come to this?  We'll have to see.  Eliza Presley's court case is back on track and scheduled to come to a head this summer.  Hopefully, Lisa Marie will reconsider her position and not force Eliza to do what she really doesn't want to do -- seek court permission to exhume Vernon's body.

Until that moment comes, we have to examine the evidence that's there.  Is the DNA evidence foolproof?  No.  While Dr. Yates and others are prepared to say, under oath, that it's definitive, there is the issue of proof in terms where the samples came from.

Eliza can establish the chain of custody showing how she obtained the samples.  But for people to accept it, they have to believe her tale about how she got the DNA.

In other words, what if she's making the whole thing up?  That's something I've thought about at length (I am a lawyer, after all).  If Eliza invented all of this, and the DNA isn't from Presley relatives but is really from her own cousins, and none of them are Elvis relations, then all of the following would have to be true:

Plus, they would have had to plan to submit the Jesse DNA to FOX 8 TV News back in 2002 and then wait to spring their master plan into action in 2008, because Eliza's 2008 sample from the pink Elvis envelope and the 2002 Jesse sample that FOX 8 TV News had tested match each other.  Why begin a scam in 2001 only to wait until 2008 to see it through?

Not to mention the fact that if this was all a master scheme to defraud the public, through a court proceeding, why would they have done it knowing that it would be so easy for their plan to fall apart?  Elvis Presley Enterprises simply has to march into court with the DNA of Lisa Marie, or either one of the two cousins tested for that matter, and they could prove in a snap that it's not true ... unless, of course, it IS true.

In other words, if this was a fraud, it would be so easy for the "Presley" camp to disprove it that no one would think they could get away with it   Yet no one has come forward in the court case to stop Eliza.

I'm sorry, but I just don't buy how they could have pulled all this off if it was a giant scam.  As hard as it was for me to believe, as an attorney, that Elvis may actually be alive, I find it much more believable that all this evidence is legitimate than Eliza and several others having engineered this entire scam years ago, knowing that it would involve testing of DNA.

But again, no one will believe it for certain unless Lisa Marie Presley cooperates or Vernon's body is exhumed.

That will silence all the doubters.  There would be no way to fake that DNA.

Stay tuned until this summer.  That's when the real fun begins.

[This is the fourth article in a four-part series covering the Eliza Presley case.  You can read Part I here, Part II here and Part III here]

Posted by:  Author and probate attorney Andrew W. Mayoras, co-author of Trial & Heirs: Famous Fortune Fights!  and co-founder and shareholder of The Center for Probate Litigation and The Center for Elder Law in metro-Detroit, Michigan, which concentrate in probate litigation, estate planning, and elder law.  You can email him at awmayoras @ brmmlaw.com.