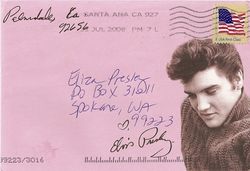 Eliza had never been an Elvis fan, but her youngest kids were.  They had spoken to Elvis' cousin, on his father's side, Donna Presley Early, when Eliza contacted her from a website.  Donna had authored books about her memories of Elvis and Eliza wanted to buy a copy of each for her kids.  Donna sent the books to Eliza's children, ages 6 and 10 at the time, in July of 1999. 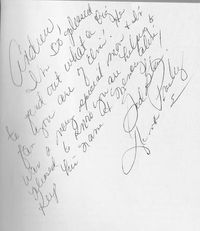 When her youngest child spoke with Donna, she had asked if Donna could send her something that belonged to Elvis. In her young mind, if you were a cousin of Elvis, of course you could.   Donna Presley then sent Eliza's children a sealed envelope with strands of her hair in it.

Eliza was shocked when she saw the envelope, realizing what Donna had enclosed. She knew because a single red hair strand was sealed halfway out of it.  She remembered a conversation with Donna where she had joked that her hair color was courtesy of Ms. Clairol.  They'd been discussing the premature graying that was a Presley family trait.  Eliza locked away the unsealed envelope, unsure what to do with it.

Then Eliza had a cancer scare in 2000.  She decided it was time to really start trying to find her father again, because what happened if she died and neither she nor her children ever knew the truth?

So, after researching how DNA worked and looking for a lab, Eliza shipped Donna's envelope along, hoping it could shed some light.  Eliza refers to this initial testing as her "jumping off point".  Either it was going to show something useful to confirm her suspicions or prove that she was very wrong in ever thinking that she was related to Elvis Presley.

The lab sent the results in October of 2000.  They showed that Eliza was, in fact, related to Donna Presley.  When she questioned the people from the lab further, they told her that Elvis could possibly be her father.  They also said if her father was not Elvis, it was someone very close to him, genetically.

Eliza knew that Elvis never had any (living) male siblings.  It never occurred to her that Elvis' father might also be her father.  But, she had her jumping off point.

Between the suggestive, but inconclusive Donna Presley Early DNA test, and the fact that her birth mother lived near Elvis and had been friendly with him, [see newspaper image of Elvis with Eliza's mother, Flo Clark], Eliza was determined to proceed with her quest to find the truth. 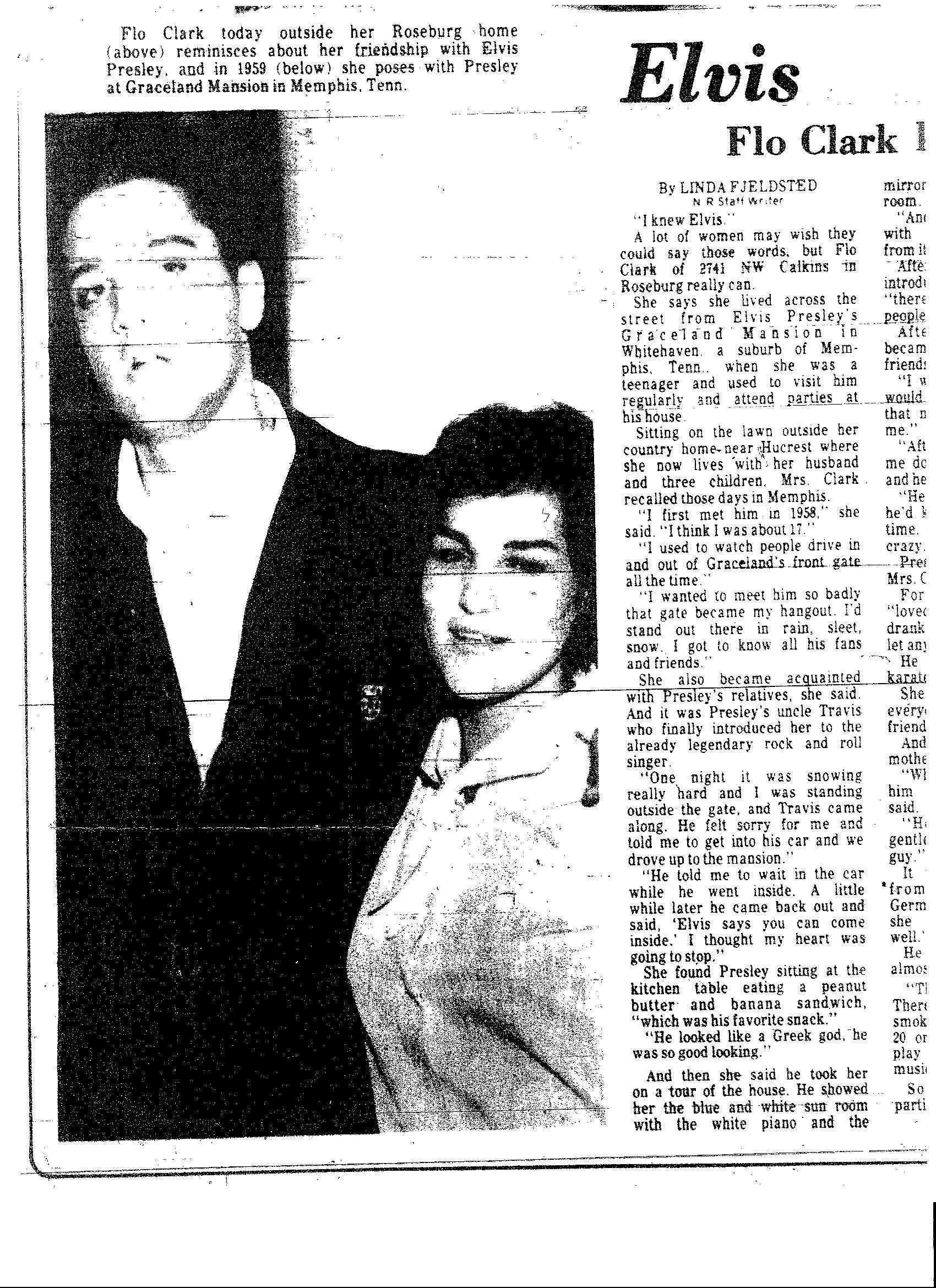 In March of 2001, Eliza and her family traveled to Graceland. Through a mutual friend, a meeting was arranged with Lois Smith Black, Elvis' maternal aunt (related through marriage).  Lois' daughter, Brenda, lived with her -- and Brenda was a blood relative of Elvis (his maternal cousin).  Eliza asked if Brenda would contribute a sample of her DNA so she could have it tested --- after showing both Lois and Brenda her DNA testing with the Presley side of the family.

Later that night, Brenda unexpectedly left, without saying if she'd cooperate or not.  But her mother, Lois, was sympathetic to Eliza.  She asked if DNA could be taken from cigarette butts like on TV.

When Eliza answered that it could, Lois pointed to the ashtray her daughter had been using that night. She stated that it was her house, so that was her trash too.  She put them in an envelope for Eliza and sealed it.  Lois also gave her own sample (a cheek swab) to prove that Brenda was really her daughter.

For years, Eliza did nothing with the Brenda sample.  Between her divorce, moving to Washington, medical problems and financial limitations, her search stalled again while the DNA samples stayed locked away in a safety deposit box.

Several years later, Eliza picked up the trail again.  This time it was not a cancer scare, but a close call on a snowy highway in February of 2004.  Once again, she could have died without knowing the truth.

Eliza tried, unsuccessfully, to track down DNA either from Elvis' daughter, Lisa Marie Presley, or from Elvis himself.  She contacted several collectors of Elvis memorabilia, hoping for a match.  However, after asking how viable DNA from an item which pre-dated 1977 would be, she was informed that there would be many concerns, such as cross contamination, and it would probably not be worth the cost of testing, much less purchasing the various items.

For years, her efforts were in vain.  She says she kept "ending up back at square one".

But then, in early 2008, collector David Collins convinced her to contact the FOX 8 TV News reporter, Suzanne Stratford.  He had initially suggested Eliza contact Stratford in 2007, but Eliza didn't because she didn't buy into the "Jesse" story at the time.  Eliza spoke to Stratford but had to wait several weeks for approval from FOX 8 News before proceeding.

They then gave Eliza the green light.  She submitted her DNA sample, plus the the Donna sample, to a lab in Canada that specialized in DNA testing of even old objects.  Eliza contacted FOX 8 News to get permission to test against an older sample they had from a former friend of Elvis, who owned a swatch from a blood-stained pair of jeans that he claimed had belonged to Elvis.

Unfortunately, the blood sample was too contaminated to work.  So Eliza then asked to test against the "Jesse" sample.  Fox 8 News sent that sample to the same Canadian lab.  And the initial testing showed that Jesse was not Eliza's father (it was the only test she'd requested).  But, the DNA revealed a much closer relationship than two unrelated people.  So Eliza asked the lab if they could do further testing.

And what happened this time?  The results . . . (drum roll please) ... a match!  The FOX 8 News sample from Jesse in 2002 showed a half-sibling relationship with Eliza in April of 2008.  Additionally, the lab reported that the Jesse sample also matched the Donna Presley Early sample (which in turn had matched Eliza as well).

By then, Eliza accepted, for the first time, that this "Jesse" person had to be Elvis -- the Elvis Presley.  So she had to speak to him.  She needed to tell him that he had a sister and find out if their father, Vernon Presley, ever knew of Eliza's existence.

Eliza was able to get through to a man who went by the name "Bern" (who was featured in the Dr. Hinton book from 2001).  Bern passed messages between Eliza and Jesse.

In one of their conversations, Bern said he was instructed by Jesse to ask Eliza about her Aunt Louise, whom Elvis had known from his Graceland days in the late 50's and early 60's.  Eliza realized Bern was speaking to the actual Elvis.  Eliza had only given the name Elizabeth (Presley), rather than her birth name (Alice Tiffin).  No one but the real Elvis could ever have known who her aunt was, especially since the only name that "Bern" knew her by at that point was Elizabeth.

Eliza was stunned.  She says she knew at that instant -- even if she had no DNA proof -- she'd have known it was in fact Elvis Presley she was dealing with.

The problem at the time was that Eliza couldn't do anything with this knowledge.  Eliza had been required to sign a non-disclosure agreement with FOX 8 News about Jesse's DNA sample from 2002.  This meant she couldn't tell anyone of the DNA results without the approval of FOX 8 News.  At that point, she did not care.  She felt she knew the truth finally, even if she couldn't go to court with it.

But Jesse was there to help (whether intentionally or not).  In the first package she sent to Jesse, Eliza included a small note card that was blank on the inside.  She attached a post-it note asking if Jesse would fill it out and mail it back to her, with a pink envelope that Eliza had self-addressed & stamped.  [See picture at top, but note that the "Elvis Presley" signature was pre-printed on the envelope.]  It took Jesse so long to return it to her that she'd forgotten about it.

Three months later, the pink envelope came back, in late July of 2008.  Eliza did not hesitate sending it to the Canadian lab.  She had to know if it really came from Jesse/Elvis.  A couple of weeks later, she got her answer.

The pink envelope was found to have been lick-sealed by the same person that had submitted the cheek swab DNA sample, back in 2002, to Suzanne Stratford at FOX 8 News.  Eliza was overwhelmed, but elated at the news.  This meant that she too now had Jesse's DNA profile and the constrictions of her agreement with FOX 8 News no longer applied.

The last piece of the puzzle was to send in those cigarette butts from Brenda Smith.  Once again, the lab results came back positive.  Brenda Smith did indeed match Jesse as a first cousin, just as Donna's had against Jesse's and Eliza's own had to Donna's sample way back in 2000.

No one alive could match these, Eliza says, but Elvis himself.  Someone had to be the offspring of the union between Gladys and Vernon for this to happen.  Elvis is that offspring, and Jesse had to be Elvis.

When Eliza explained all this to me, I found it interesting.  But, as a lawyer, I wasn't prepared to believe anything (especially this outlandish) without seeing the reports myself.

So, when Eliza and her attorney in Memphis finally agreed to allow me access to all of the DNA reports, as well Eliza's supporting evidence, I was able to form my own opinion.

What did they show?  And what do I think about them?

[This is the third of a four-part series covering the Eliza Presley case.  You can read Part I here and Part II here.  Part IV is here]

Posted by:  Author and probate attorney Andrew W. Mayoras, co-author of Trial & Heirs: Famous Fortune Fights!  and co-founder and shareholder of The Center for Probate Litigation and The Center for Elder Law in metro-Detroit, Michigan, which concentrate in probate litigation, estate planning, and elder law.  You can email him at awmayoras @ brmmlaw.com. Follow us on Google+