Curious about how celebrity estate errors can help you protect yourself, your family, and your heirs?  This video introduces our book, Trial & Heirs:  Famous Fortune Fights! by giving an overview of will and trust contests, using the Anna Nicole Smith case as an example.  Anyone who faces a probate fight like this one has to learn their legal rights!

Ike Turner Will Contest Ruling is in

The trial involving whether Rock 'n Roll pioneer & legend, Ike Turner, left a valid will has ended.  As described in this prior article I wrote, the case pitted his six children (two of whom apparently are now questionable children of his) versus his ex-wife versus his friend and "sometime" attorney.  I'm not exactly sure why someone would be a "sometime" attorney, but that's how he was described in this North County Times (California) article about the trial. 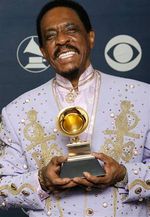 The children argued Ike died without a valid will, leaving all to them under California's intestate laws.  The ex-wife, Audrey Madison Turner, felt that Ike had left everything to her through a handwritten will written two months before he died of a drug overdose in 2007 (even though the couple was already divorced).

The "sometime" attorney believed a prior handwritten will in 2001 left him in control of Ike's legacy.  What was that legacy?  While it appeared the estate was cash-poor, the victor would receive the rights to own and profit from some 4000 songs.  That's a lot of notes!

A few days ago, the judge issued his decision.  He ruled that both wills may have been valid, but a later note written by Ike Turner had revoked the last will, which in turn had revoked the 2001 will.  This meant the children were the big winners . . . at least so far.

Continue reading "Ike Turner Will Contest Ruling is in" »