Hong Kong's doozy of a will contest case

Nina Wang was Asia's richest woman and one of the wealthiest women in the world -- with a larger fortune than the Queen of England, according to Forbes.  She died of cancer, without children, on April 3, 2007.  So who inherited this vast wealth -- estimated to be as high as $13 billion (U.S. value)?  Why, her feng shui master, of course. 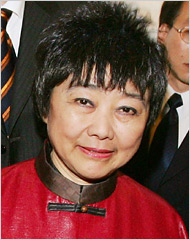 Tony Chan was her personal consultant of all things feng shui.  Feng shui is an ancient Chinese philosophy of art and science that is used to balance the energies of the space people occupy to promote good health and fortune (at least, that's what I read somewhere).  Must be pretty powerful stuff, because Nina Wang signed a will in 2006 leaving the esteemed Tony Chan EVERYTHING.

This will replaced a will from four years prior that benefited charity and family members.  So of course, the 2006 will was promptly attacked in court, launching perhaps the biggest will contest proceeding Asia has ever seen (or at least, Hong Kong).  They claimed that Chang used undue influence by convincing Wang that she'd enjoy eternal life (or at least a very, very long life) by signing the will.  Sadly, it didn't work -- she was 69 when she passed.

Chan fired back.  There was no fraud or trickery at all, his probate attorney argued; he was . . . Nina Wang's secret lover.  For 14 years, Chan claimed, she would sneak off to meet him for midnight meetings -- as far back as 1993.  They covered their tracks by saying she was going for feng shui consultations, but it was really all about the love.

The case became even more interesting when the lawyers again appeared in court, just a couple days ago.  At the court hearing, the judge was given a report by another feng shui master that Chan had tricked Wang into signing the will by telling her it would be used in a feng shui ceremony, in which it would be burned.  Chan instead secretly kept the will, pulling it out in 2007 after Wang died.  Chan of course denied it.  Here is a recent article about the case.

Now the case appears to be proceeding to trial, reportedly scheduled for 8 weeks long (which may just be for starters).  Will the feng shui master walk away with $13 mill, or will his actions be exposed as fraud?  We'll have to wait and see.

But first, there is yet another twist to this tale. This is not the first will contest case that surrounded the Nina Wang fortune.  Indeed, years before, she herself was involved is just such a legal proceeding - but that is a story for another day.  Stay tuned in the weeks to come for the interesting tale of how Wang became so wealthy.

In the meantime, what lesson can be taken away from this story?  How about, watch out for feng shui masters?  Actually, there is an important moral here -- those who would take advantage of a wealthy senior come in all shapes and sizes.  Caregivers, children, neighbors, financial planners, and yes, even feng shui and other unique consultants can be tempted.  If you have an elderly loved one, don't be afraid to ask questions, be proactive, and keep your eyes and ears open.  Watch out for warning signs of financial elder abuse (courtesy of the National Center on Elder Abuse) and remember that an ounce of prevention is worth many pounds of cure in this arena.  It's always hard to put the cat back in the bag and try to undo financial exploitation that has already occurred.

And if you do suspect that an elderly loved has been tricked out of assets, or convinced to sign a new will, don't hesitate to talk to an experienced probate litigation attorney.  Undue influence and similar fraud happens far too often, especially in this economy.