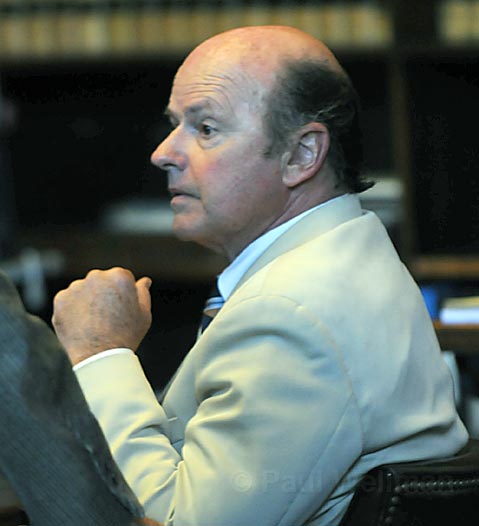 He must have done a pretty poor job of it.  The girlfriend's family started a lawsuit over the forgery, and after a handwriting expert convinced a court that the will was not legitimate, Blomfield was ordered to pay $340,000 to the family as restitution.

He was also charged criminally and pled guilty to financial elder abuse, burglary, forgery, and other crimes.  His punishment includes a year in jail (most of which he served before he was sentenced, due to extensive delays while he underwent psychiatric evaluations), and faces up to 10 more years if he violates conditions of his probation.  Blomfield's sister and two other accomplices also pled guilty to will forgery, conspiracy and perjury.  The Santa Barbara Independent recently published an article about the case.

It is too bad, but police and prosecutors often are not able to take on cases such as this one, because they are limited in resources and staffing.  They often focus on other crimes that are easier to prove and considered to be more serious.  With the growing number of elderly people and the poor economy, predators such as Blomfield are more likely now than ever to use fraud, deceit, trickery and forgery to weasel their way into an inheritance that was never intended for them.  In fact, a recent study found the yearly losses caused by financial elder abuse to be 2.6 billion dollars!

Which means that probate litigation attorneys need to be ever vigilant to pursue cases of financial elder abuse.  But many clients cannot afford the costs of litigating a forgery or other exploitation case.  Families who are confident that wrongdoing occurred sometimes owe it to their deceased loved one to try.  If more wrongdoers like Blomfield were criminally prosecuted, then others would be less likely to try to take advantage of an elderly person or a situation like this one.