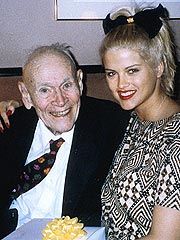 Interestingly, a Texas probate court had previously held a trial on the same claims between the parties and ruled in favor of Pierce Marshall and against Anna Nicole Smith.  Because of the earlier Texas proceedings, Pierce Marshall challenged the rulings of the California federal courts, claiming they lacked jurisdiction to decide the case because it was a "probate" matter.  That legal challenge went all the way to the United States Supreme Court (the highest court in our country), which ruled in favor of Anna Nicole Smith in 2006.  The high Court determined that the federal courts did have jurisdiction to award the $88 million to Smith.

Before she could collect the money, Pierce Marshall died, in June, 2006.  Anna Nicole Smith,of course, then died as well, in February, 2007.  Because of Marshall's death, the federal courts imposed a "stay" on the case, freezing it until Marshall's estate could be straightened out.

There the case sat, until this week.  On March 9, 2009, Howard K. Stern, on behalf of Anna Nicole Smith's Estate (and for the benefit of her young daughter, Dannielynn) asked the United States Supreme Court to unfreeze the case and lift the stay, allowing the money to be paid.  Stern argued that the Pierce Marshall Estate would dispose of its assets, leaving Smith's Estate unable to collect its money.

Interestingly, just a few days after Stern filed the official request, the California Attorney General criminally charged Stern, as well as Smith's doctor, with conspiring to provide Smith with thousands of prescription pills just before her fatal drug overdose.  The Attorney General even held a press conference today, during which he described Stern as the "principal enabler" in Smith's prescription drug addiction.  If Stern wasn't superstitious about Friday the 13th before today, he must be now!

To make Stern's day even worse, the Supreme Court then denied the request to lift the stay, meaning that the Smith Estate would have to continue to wait to try to collect the $88 million.  If Stern's concerns in that case have merit, this means that the Smith Estate faces the possibility of losing out on the money even if it wins the remaining issues on appeal.  The Pierce Marshall Estate is trying to overturn the judgment on other legal grounds and feels it does not have to pay the money.  Now, the two estates will likely have to wait years before the whole legal mess is finally sorted out.

By then, Stern may be serving a stiff jail sentence.  Of course, this is the same Stern who claimed he was actually Dannielynn's father, until DNA testing proved otherwise.  Who knows how old Dannielynn will be when -- and if -- the Marshall money is ever paid.

Truly, this is one probate litigation case that has it all.  Will contests and trust challenges, claims of undue influence, mental incompetency, fraud, forgery, deceit, lying, cheating, stealing and even criminal drug overdosing.  And there are still years of fighting left.