I've previously posted about the Peter Falk guardianship / conservatorship filing by his daughter, due to his Alzheimer's disease, and about the family feud that began when his wife objected to the daughter's requests, which is not unusual in second-marriage situations.  Now, the case appears to be nearing resolution.  The judge hearing the conservatorship case has been ruling against Falk's daughter, Catherine Falk.

Several days ago, conservatorship attorneys appeared in court for Catherine Falk and Peter's Falk wife, Shera Falk, to determine what would come of Catherine's legal petition to appoint a new decision-maker for her father, whom she claimed was unable to make decisions due to his Alzheimer's disease.  She alleged Peter needed to be protected for his health and safety, as well as financially to insulate him from fraud and undue influence. 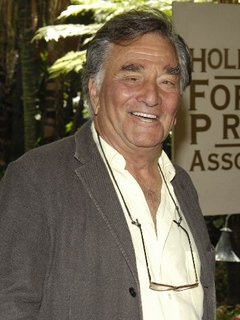 Shera Falk, married to 81-year old Peter Falk for 32 years, claimed she had the legal authority to make decisions for him already due to power of attorney documents, so there was no need for a conservator to be appointed.  She denied he needed protection or was in any danger.

The judge ruled in favor of Shera Falk, and decided not to grant the daughter's request.  In fact, Catherine had already withdrawn her petition for conservatorship over his financial decisions, and the court felt that Peter's care was being properly managed by his wife.  The court-appointed attorney who investigated the daughter's claims had previously reported to the judge that no conservator was needed, and the judge agreed in the recent court hearing.

However, Catherine Falk's attorney still argued that the case shouldn't be dismissed.  He claimed that Catherine was not being allowed to see her father, and without court intervention, she wouldn't see him again before he died.  The judge ruled that Catherine and her lawyer should have a chance to present that claim.

Specifically, he had already granted a 30-minute, supervised visit between Catherine and her father in February.  He now has scheduled a court hearing for May 27th to hear testimony about how close Catherine and her father were before his dementia set in.  Presumably, if they enjoyed a close relationship before, the judge will allow her to see her father.  Otherwise, he will probably allow Peter's wife to decide whether or not to allow visits.

The court-appointed attorney believes that regular visits would not be constructive because Peter would not remember them.  You can read about the case in this Associated Press article.

Truly, a sad situation for everyone.  A family with a loved one suffering the terrible effects of Alzheimer's disease or other dementia has a hard enough time; adding a public and expensive family feud in court makes it far worse.  In my Michigan guardianship and conservatorship law practice, I see this happen all too often, usually between feuding siblings or spouses battling children from a prior marriage.  Even with valid power of attorneys documents in place (as apparently exist in this case), families can still be brought to court in this situation.  Those acting under a valid power of attorney can be challenged -- and even removed -- if they misuse or abuse their legal authority and don't act in the best interests of the person they are supposed to protect.

Is this a case where the wife of Peter Falk is abusing her authority by interfering with Peter's relationship with his daughter?  Or is this a situation where the daughter wasn't close to begin with, and is trying to build a relationship at the last minute before her father passes?  We should find out after the May 27th court hearing.