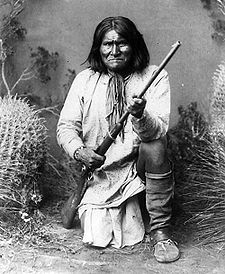 How much of this Skull and Bones tale is rumor and how much is true?  Geronimo's heirs want to find out.  The great-grandson of Geronimo, 61-year old Harlyn Geronimo, believes that the spirit of his legendary ancestor has never been able to rest because of the rumored desecration of his body.  He and other relatives want to learn the truth about what happened and allow the great warrior to find peace.  They also seek to remove what remains of his body in the Army cemetry in Oklahoma and relocate Geronimo to New Mexico, consistent with his wishes according to his autobiography.  Oh, and one other thing -- they seek monetary compensation and punitive damages, from the secret society, Yale University and the United States government.

But before you think this was filed by some sleazy attorney looking to make a quick buck, the plaintiffs' attorney who filed the lawsuit is former United States Attorney General Ramsey Clark.  He wants to locate all of Geronimo's missing body parts and allow the family to properly bury them.  He recently filed the lawsuit on the 100th year anniversary of Geronimo's death in the United States District Court for the District of Columbia.  You can download and read the Complaint which started the lawsuit.

This will be a fun one to keep an eye on.  I've no idea how an attorney goes about serving a copy of the lawsuit papers on a secret society, but I guess a former US Attorney General would have his ways to find out.