Formula One is one of the most popular sports in Europe (after soccer of course).  Bernie Ecclestone is the wealthy head of Formula One, worth about 2.4 billion pounds -- that equals almost 3.5 billion dollars to us.  Ecclestone married his wife, a supermodel named Slavica,  24 years ago.  She is 28 years younger than he is and stands 10 inches taller. 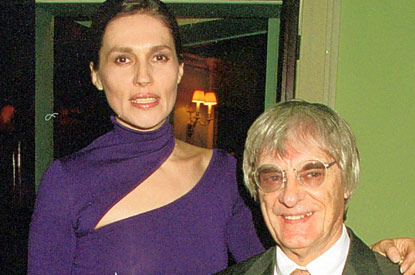 Reportedly, Ecclestone loves his wife very much.  They have two grown daughters together; sadly, she left their martial estate recently and announced she is divorcing him.

There's just one minor -- or not so minor -- problem.  In order to save money on taxes, Ecclestone placed most of the proceeds from his recent sale of 75% of his Formula One holdings into offshore trusts in Slavica's name.  As a non-British citizen, she pays less taxes -- but of course, that means, she controls the trusts and the billions they hold.

Now Ecclestone has hired one of the most expensive lawyers in England (fresh off representing Madonna's ex Guy Ritchie) to sue his beloved wife to get his money back.  The London's Telegraph newspaper recently reported on the story.

Do you think Ecclestone is rethinking his decision to place so much trust in his wife?  Will he be able to recover everything he placed in trust in her name?  The answer to the first question is obvious; the second one may not be.  We'll have to see what happens in court.

While most people don't have to worry about whether or not they should place money in trust for someone else in order to save millions in taxes, this story still illustrates an important lesson for everyone.  It is rarely wise to place control of your assets in someone's name.  Ecclestone can afford an expensive litigation attorney to sue to get the money back.  Most people cannot.

Yet, every day in this country, countless people give up control of their largest assets by adding someone else's name and making ownership joint.  This often includes homes, bank accounts, and insurance policies, just to name a few.  Most do this by signing a deed so a child's name is on the title of their house, or they add someone as a co-owner of a bank account.  They want to save money and avoid hiring an attorney, instead using joint property as a "poor-man's will" to avoid probate court.

This approach often leads to disaster, just like in Ecclestone's case.  If you do a proper estate plan, with a good estate planning attorney, you can place your assets into a trust and keep control by naming yourself as trustee.  If you can't afford a trust, you can still take care of your family the right way with a will.  Either way, trying to take shortcuts to save money often leads to lawsuits and a whole host of other problems down the road.  The person you trust may not be so trustworthy after you are gone -- or even when you are still alive if he or she develops money problems or creditor issues.

When you place someone else's name jointly with yours on real estate, bank accounts, cars, or other property, you give up control.  It's never worth the risk!